We are using Asp.Net Chart Controls to create a series of charts from a csv data stream that a user uploads to the server. Until we hit this error "Error executing child request for ChartImg.axd." Since uploading the file is a post-back, we had to change the charting HTTPHandlers.

Microsoft is scheduled to release Update Rollup 7 for Exchange 2007 SP1 today (3/24/09). Based on our review of what's fixed, if you have Entourage clients, expect to do a migration in the next month, or use calendaring, then you should apply this. We will apply this and let you k now if we find anything (if you find anything please post comments!)

Here are some of the calendar-related fixes in the update:

International Characters and your Migration into Zimbra

We have someone in Switzerland migrating into Zimbra. In this case they're migrating from Meeting Maker.

The appointment at 17h00 should read "Jürg":

Quick, immediate, and cost-effective means of correcting: UNIFIER, available from here.
Our prospect ran with these options: 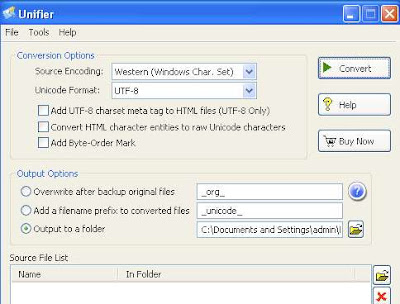 After which his character set conversion issues were no more.

Just to cure your insomnia if it is not already: Meeting Maker server data is stored internally in a Macintosh character set (regardless of what platform you are running on). When we convert Meeting Maker into the intermediate database we convert it into Windows Code Page 1252, Microsoft's default Western European character set (We mainly go to Exchange, after all).

The lower 8 bits with French and German characters should be OK -- but our friends in Switzerland were running with Macintosh clients.

We'll add a UTF-8 option if we get more European demand.

We've gotten a couple of inquiries out of academe for migrating calendar data out of Mirapoint and into Exchange.

Since we'd done the rough sketch on running Meeting Maker data INTO Mirapoint (though the people who asked for that are now lost at sea), pulling it out and putting it into Exchange did not seem so difficult. 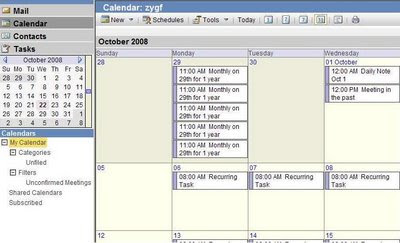 Actually, when we brought it up at our Friday development meeting the Decryption team at Sumatra already had the full spec, and the Insertion team began modifying the existing Oracle Calendar conversion code and... (don't try this at home, kids, we have years of experience that keep us safe from the occasional software fire hazard)... it was basically running by the end of the day.

So we're reading VCS files and converting them into our common intermediate format, and prepping to do all the sorts of things you've come to expect from a Sumatra migration:

If anybody else out there wants to migrate calendars out of Mirapoint and into Exchange 2007 -- drop us a line. Mirapoint claims to have 120 Million mailboxes installed, so we'll be happy with a few hundred thousand or so.
Posted by zyg at 2:09 PM No comments:

Why would an enterprise user want to print a Silverlight page?

Sumatra is working on a tool to analyze conference room use in Exchange 2007. Sumatra's tool helps facilities managers understand resoure use patterns through 25+ charts and tables. We picked Silverlight as our display engine because it produces the most amazing charts and tables (see below)!

We were days away from a beta-launch, when our QA team decided to print out the entire collection charts. We were stunned when only the first page printed. Looks like Microsoft decided not to include printing in the first two releases of Silverlight. The work-arounds aren't pretty.

Yah, it was nice to see our President's inaugration speech via Silverlight. But does this mean that the only line-of-business apps available to Silverlight are going to be consumer gaming and video-watching apps? Maybe this is the way to make corporate America greener -- prevent enterprise users from printing Silverlight-generated page via the browser?