SO we have options for making our process make them NON-PRIVATE if you wish.

OR if you want to migrate it as private and then change it, this VB script will help.

Depending on the situation there are four permissions your service account must have to function successfully in either a migration or using Sumatra calendar tools:

In which situations are these permissions used?

This summarizes the types of permissions you must use when using Sumatra calendar technology.

Full Access grants the service account permission to access the user account.   Full access allows you to read from and write to folders in both enabled and disabled accounts.   If you are just cancelling meetings from the conference room, full access is sufficient.  If you want to send mail on behalf of a disabled user/room, you will also have to grant send-as receive-as (see the next section)
To grant your service account (called “exsu”,)  full access for a room (“crar210q”), use the add-mailboxpermission cmdlet.
See our blog: (http://calendarservermigration.blogspot.com/2009/10/fullaccess-fails-with-error-specified.html)
Note that group policies sometimes prevent permissions from being inherited.  Please use Active Directory Users and Computers (ADUC) to ensure the permissions were set!  Find the account (crar210q) and right-hand click to obtain properties.  Select the security tab, then advanced. (If the security tab is missing, select Advanced Features under View.)   You can check the permissions, or the effective permissions.  You should not see deny checked! 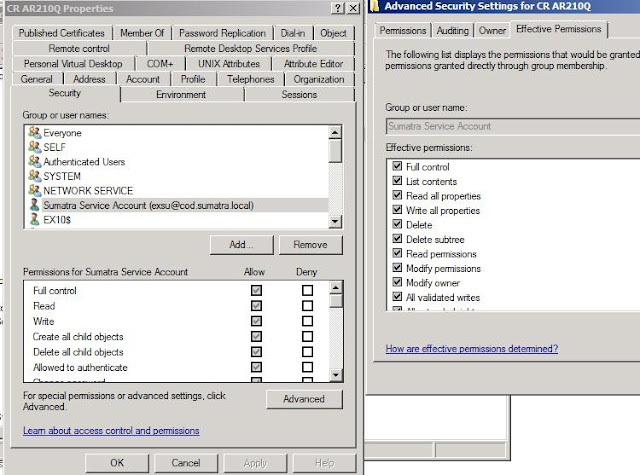 Many enterprises grant access to the global catalog if the user is a member of the domain.  If login is failing, anonymous access is probably disabled (since Windows 2000 DCs).  Make sure you are an authenticated user.

Make sure your service account is allowed to log on locally (as in the Local security policy, or if you have multiple machines, set via Group Management Policy, screen shot below.) Otherwise you will generate a 401 error. 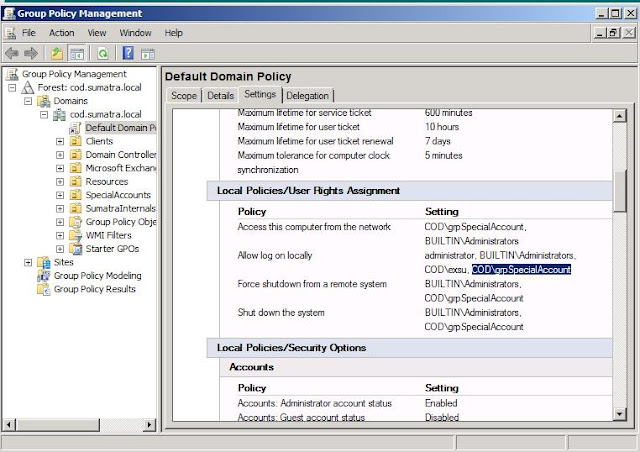 Note that in the example above we have both a specific service account and a Group of Service accounts.  Using groups in this way is an effective means of managing several accounts if you need to segment them for Exchange data insertion. 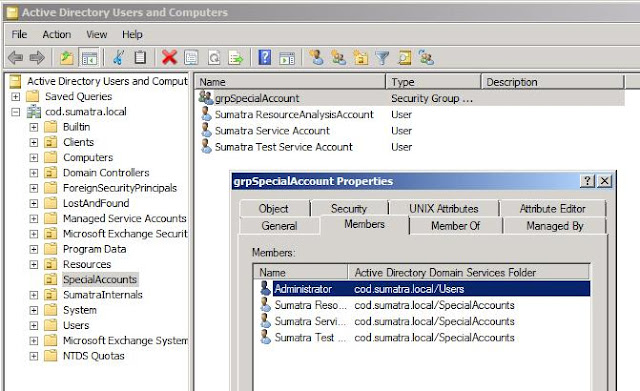 Setting permissions correctly is one of the largest stumbling blocks in the process.    Here is a list of the HTTP errors, and ways to debug (and fix) permissions.

Start with IIS Basic authentication on the EWSvirtual directory. It’s the easiest to see / fix.

Open a browser window, and try to open you EWS url.  If you typically point to the load balancer, point to one CAS server instead.  Try to open the ews url e.g., http://ex10/ews/exchange.asmx.   You should be prompted for credentials.  Enter the service account credentials.  If the credentials are rejected, your service account may not be allowed to log on locally.  If you can login, try to insert a “test” appointment using suExchange.  If you see a 401, it will be due to basic authentication not set OR the CAS/MBX server(s) are not members of windows authorization access group.

Here’s an easy way to confirm you cannot log on locally.  Go to the cas server you pointed to in the EWS url, and open up the Security event log.  Search for event ID 4625, keyword Audit Failure.  You’ll know you have to grant log on locally if you see your service account, with failure information “the user has not been grated the requested logon type at this machine”.   If so, allow the service account to log on locally via a group policy or local security policy. 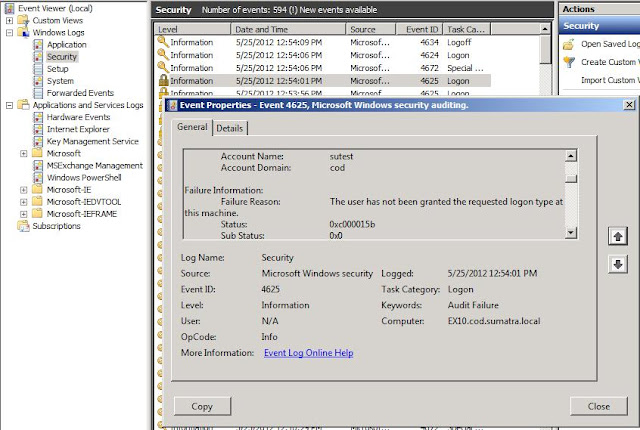 Look in the IIS logs.  If you see a 401 error, check IIS.  If basic authentication is disabled, enable it. Remember to cycle IIS:  “iisreset /noforce.”

Issue: Computers are not members of Windows Authorization Access Group

If you are still getting a 401 error, ensure that ALL exchange computers and domain controllers are members of windows authorization access group. 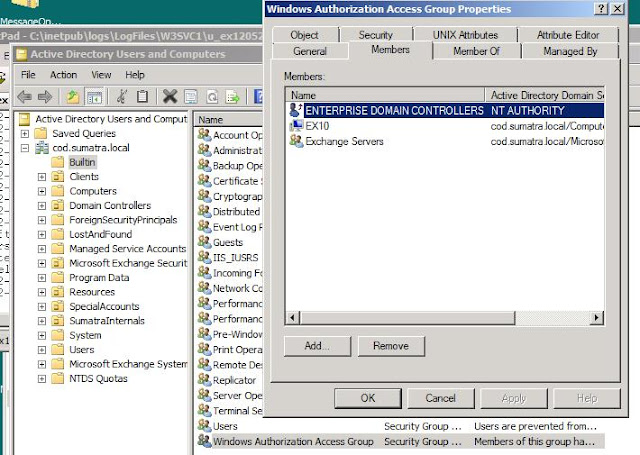 If you are still getting a 401 error, try logging into an active end user’s mailbox via OWA (like your own!) using the service account credentials.  If you see an error in OWA:

Check the Application event logs on the CAS server for Event ID 17. If you do, then create a “New-ManagementRoleAssignment” to grant the service account ApplicationImpersonation permissions (see “Impersonation,” above.) 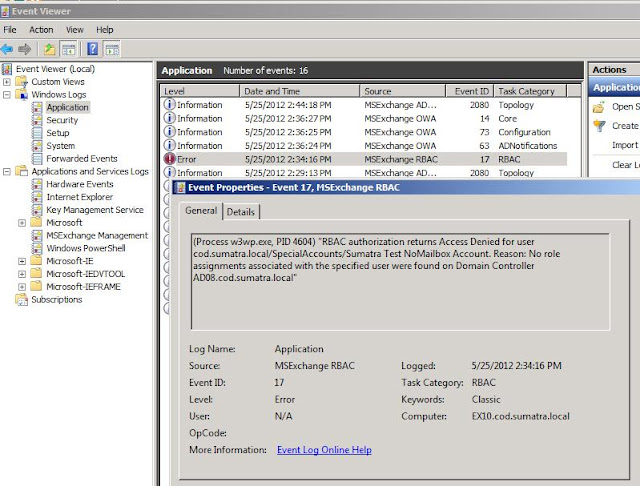 Microsoft does not close a window without slamming a door and bricking you in.

One of our least favorite topics again comes to the fore: Throttling in hosted Exchange.

Redmond claims these changes are customer-driven, which may or may not be so, but from the standpoint of customers who want to migrate a lot of calendar data into Hosted Exchange, these modifications are like getting a grenade tossed in your lap.

In an on-premises migration it's straightforward to turn these limits off.  Going into Hosted you're at the mercy of Microsoft (good luck with that) or the cleverness of your developer (yes, we can handle this).


If like me you find an hour long video of Exchange Web Services Affinity and Throttling as and act of stultification on the order of Hypnotoad, you can read most of the gist of this at More throttling changes for Exchange Online.


During validation, point to different CAS servers to reduce CAS-server throttling (our code is going to need to change to do this)


During an insertion, use MULTIPLE service accounts which means using parallel insertion processes and point these to different CAS servers.  We're set up for this already, but we now recommend it in smaller migrations than we used to.


During migration, set the batch input to at least 50 calendar objects.


Props to Andrew at UC Irvine who called this to our attention by stepping on the landmine in test last week.

As more Sumatra customers stand-up x64 systems, they hit the "Unrecognized database format" error.  The issue:  There isn't an x64 MS Access driver.  But there is a solution:

If you are editing the suExchange _config.xml file, you'll find those settings in the DatabaseProvider tag.  The choices are: