While stress testing our migration methods -- we did a major push for performance optimization aka SPEED -- before a migration this past weekend and of course that meant a few bugs crept in, we got this message from Oracle Beehive. 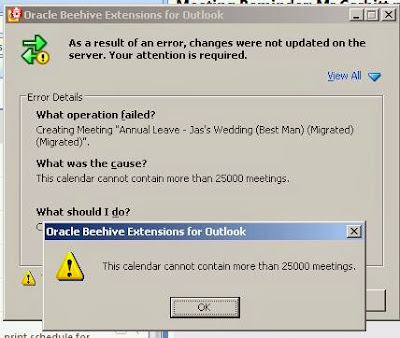 So if you did not know it before, there's a hard limit of 25,000 meetings in Oracle Beehive Extensions for Outlook.  Hard as it is to believe we do know of users who have exceeded this in other legacy systems.
Posted by zyg at 3:37 PM No comments:

We do not make them live in migrations.  The reason is simple: they confuse the heck out of the attendees and it's not worth it.  While you can communicate to your internal folks that a migration is going on and we are taking care of re-creating the meetings, we cannot reach out of your organization and re-accept or decline for your external guests.

But we can let YOU know about them.

So as of all forthcoming version of our process we're keeping the record of external guests in the meeting agenda, exactly as you see here post-migration. 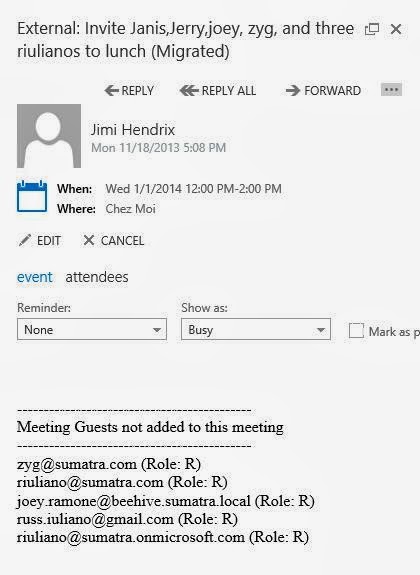 When Impersonate Permissions Fail DURING a Migration

Interesting case came up this weekend.

An 850 user Beehive to Exchange Migration validated fine (notable for two things: First European Beehive migration and first multiple instance Beehive migration) and then while in migration started throwing impersonate errors for what became a total of ten users.

But it seemed really wasteful to undo the entire migration for ten users.

Here's what we did.

We modified the insertion to allow for a single user.  Not via validation of that user which is a good test procedure but it would be insufficient here.  You need the validation file to be as entire as you can get it -- otherwise there will be inaccuracies.

First fix your permissions issues with those users.

Here are the steps we recommend:

Once you have added data from the impersonation-problem accounts, return to the “main instances” of bCalReader.

For each of these instances:
Posted by zyg at 2:03 PM No comments:

Now that we have Beehive to Exchange migration running reliably and in test in both the USA and Europe, we're working on improving the throughput with our old friend: Multiple Instances aka Segmentation.

Since re-creating calendar state in Exchange requires sending, responding, and creating exceptions for meeting invitations, this technique does require some special handling, which we're detailing here.

First, the screen morphs a little:

As we've done in the past, this is an alphabetic list, so

1. Make sure when you do this you cover the entire alphabet.  Once a site left out the letter "k" -- yet another great example of why we built "UNDO" capability into the process.
2. Sometimes resources or rooms start with numbers, so make your first installation "SPACE" instead of "A".  If you try to use A this comes up:

3. Remember what we said earlier about sending invitations and responding to them?  Suppose that Adam Ant invited Lex Luthor to a meeting, but Luthor is in a different segmentation.  It's possible one instance could be trying to respond for Luthor before he gets the invitation and suddenly everybody gets confused.  No worries.  After the invitations have been sent for each instance the code pauses and tells you to wait for all the other instances to catch up.

How to use this:
As always, TEST TEST TEST before you go live.

Performance Optimization in a Beehive to Exchange Calendar Migration

We've been fine-tuning the performance in the Beehive Calendar to Exchange calendar migration.

A little bit of background is due here.  We use the rate of 850 objects per minute as a rough gauge of Insertion time into Exchange in our Meeting Maker or OCS migrations.  But that is ONLY for insertion into Exchange from our own data structures and does not include the time for any processing of Legacy calendar data (the Extraction phase).

For Beehive, we've combined the EXTRACTION and INSERTION into one application where we read directly from Oracle's relational database.

And needless to say performance varies hugely with the Beehive topology and servers.

So a few general results: