You can download the Sumatra Double-Booking cmdlet for Exchange / Office 365 in a .ZIP file from here.  The ZIP file also includes the documentation as a PDF.

You will need to contact us for a key if you want to try it out.

You can just report on double-bookings using our previously-released script.
Posted by zyg at 2:32 PM No comments:

There are three basic ways of automatically dealing with double-booked resources in the Sumatra cmdlet suDoubleBookedMeetings.

Let's look at the cases for each of those with this real-world double-booked meeting in Room 222 which both Janis Joplin and Jimi Hendrix have booked. 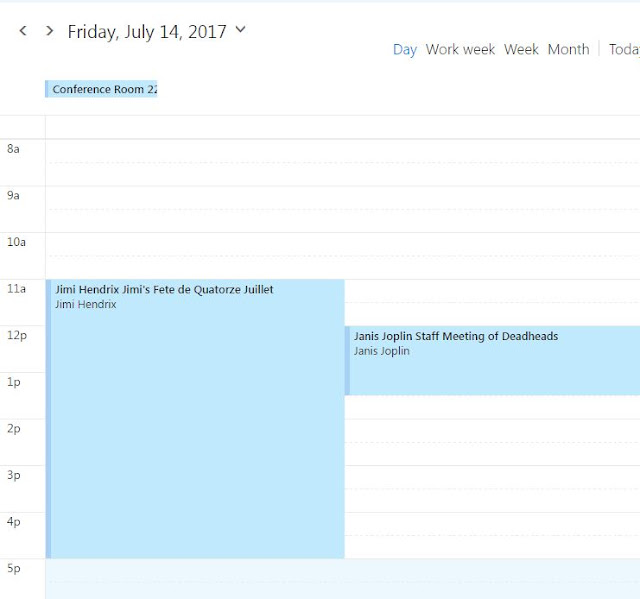 You guys work it out
You could think of this as the kinder-gentler "We're going to inform you but not enforce any changes" option.

Each of them receives this notification and nothing is removed from the conference calendar.

The early bird gets the room:
using this command:

Since Jimi Hendrix booked this slot in Room 222 before Janis Joplin did, under this scenario the room goes to Jimi and Janis is notified (Note that this notification comes directly from Microsoft Exchange): 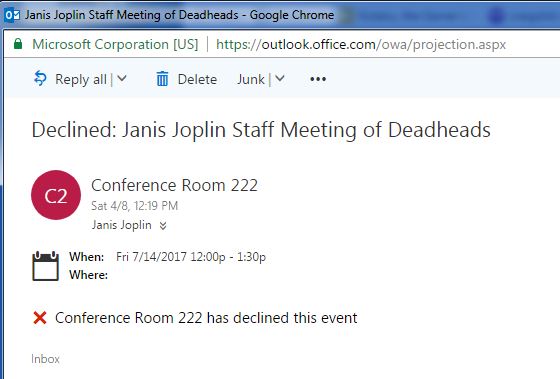 Rank has its privileges
But let's say that Janis Joplin is a VIP and Jimi Hendrix is not.  Then, using this command:


Janis gets the room and Jimi is declined by the conference room.  Note that this results in the exact OPPOSITE of the situation just described above. 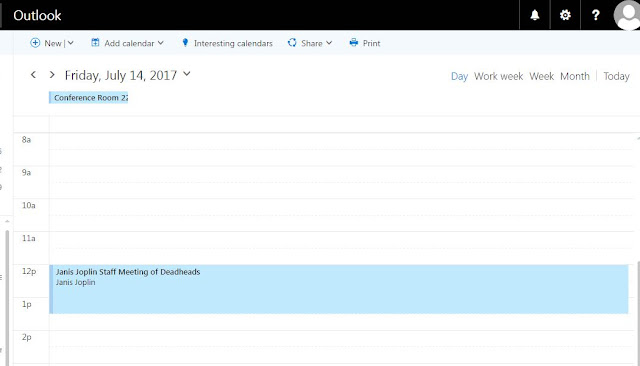 We think this covers all the social hierarchy choices you should have to make with the conference room, but please feel free to let us know.

$LiveCred is a variable we've set up to store credentials to the Exchange server in PowerShell.  Check out our earlier postings if you're unsure how to do this.
Posted by zyg at 5:48 AM No comments:

How the Sumatra Double-Booking cmdlet works

October 2022: We just updated our cmdlet for Modern Authentication.
Free trial if you qualify and contact us.

First: you can always get help at the PowerShell prompt with:
get-help Get-suDoubleBookedMeetings

Let's say that we have the following calendar for Room 222: 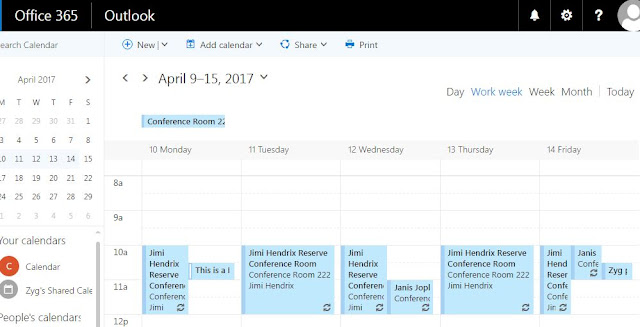 Clearly there is some double-booking here.

Keep in mind neither Jimi Hendrix not Janis Joplin have any way of knowing from their own calendars that a conflict is imminent.

You will generate notifications to Jimi Hendrix that look like this:

Note also that we cover the case of a managed conference room where a Delegate might be putting appointments into the room calendar.  In this case even though the time is listed as FREE, we notify both parties.  We have no way of knowing WHAT is there, but there is the potential for conflict and we need to alert users to it.

If you want to get a little more proactive, we could define Janis Joplin as a "VIP" so that her meetings take priority over everyone else's.  Look at her conflict with Jimi Hendrix here: 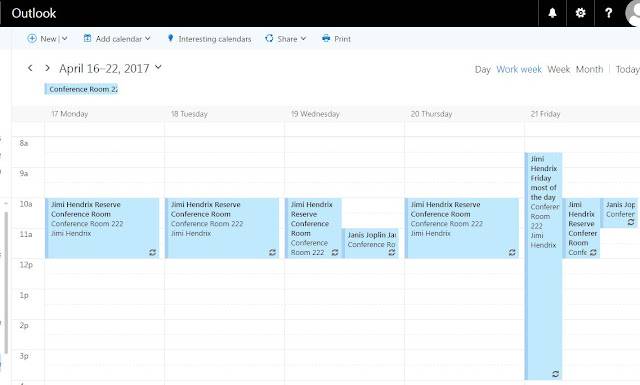 We execute this command: 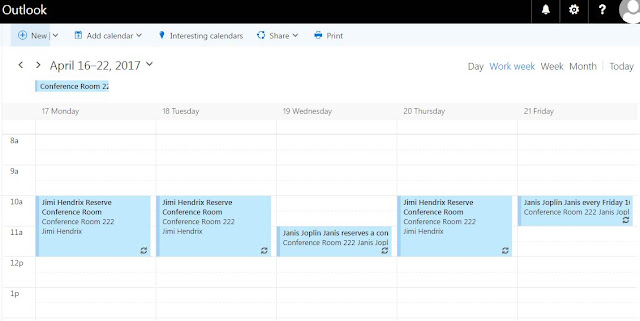 And Jimi is notified that the resource has declined his request 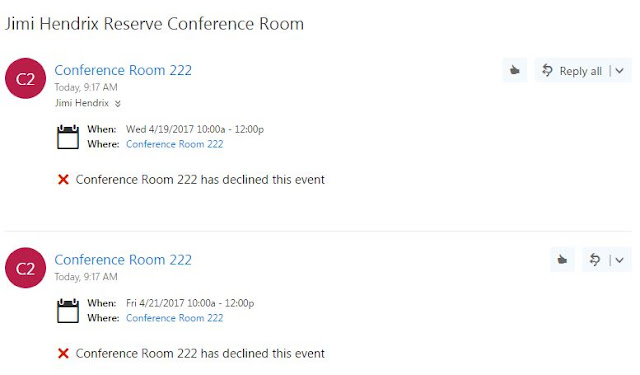 We think this is a very elegant solution to the problem of managing double-booking in the real world.
Posted by zyg at 3:03 AM No comments:

Sumatra is recognized as the expert in Exchange Calendaring.  Even so, we were surprised at the sudden influx of requests for info on the problem of double booked conference rooms.

This subject is really trending on our blog.

We're taking a two-pronged approach that helps both Exchange end-users and Exchange Admins:

First, for the DIY crowd, we released a FREE PowerShell script to report on double bookings – open source, under the MIT license.  This blog post covers the script.

Second, for the enterprise, we will release a cmdlet that does everything the free version does, and a whole lot more:

So first, the script.

It's available for download here.  We call it the Sumatra Double Booked Resources Reporting Script.  It's a text file, you'll need to rename it as a .PS1.  We do this or else your anti-virus software will get huffy.

Successfully generating your report will give you results like this:

which will tell you the room with conflicts (not surprising since you have specified it, see below), the organizers, start and end date of the conflict and the number of other parties involved?

Number of parties?  Yes.  Note that one of the meetings above is triple-booked.

The text file is meant to be self-documenting, but in case you need some examples, here you go.

To get a report for a single resource (with some specific examples):

To generate a report for ALL resources, piped in from Get-Mailbox:

To generate reports for multiple rooms from a file:

This generates reports to the Exchange Administrator.

These examples in more general form are in a text file here.

Those of you who know PowerShell know you only need to import the function once per PowerShell session and then can invoke just the command suDoubleBookedMeetings.  If you did not know this before, you do now.

Looking to pull your Exchange Admin out of the loop on what to do with the information next?

So glad you asked.

Watch this space for news of our cmdlet that automatically informs meeting organizers.
Posted by zyg at 4:44 AM 1 comment: