So remember a few days ago when we told you about a great simplification in setting up permissions?

Basically, and you should not be too surprised at this, the permission for BES admin are really really close to the permissions necessary for inserting holidays or running a full-state calendar migration.

which advises setting permissions as follows:

Open Active Directory and from the View menu select "Advanced Features". Then
go to each user that will be added to the BES and open their properties, go to
the security tab and add the user BESadmin and add the security permission "Send
As". (This will overcome some MS patches that prevent BES sending emails).
Methods are available to add BESadmin "Send As" rights to all users if required
but this method ensures only the required users have permissions added.

Make BESadmin a local Administrator of the server where you will be
installing the BES software. This is done by right mouse clicking my computer
and selecting “Manage”. From Computer Management expand “Local Users &
Groups” and select Groups. From Groups double click “Administrators” and add
BESadmin.

This is pretty much what we tell you to do in setting up a service account for running a Sumatra migration or inserting holidays, checking for broken meetings, or running the "terminated user" option in our code.

If you do not have a specific service account set up yet, this is a good place to start.

Well yes, we did go ahead and add the server-side holiday insertion into our mainstream migration code for Exchange 2007.

And we even field-tested it at a site in a mythical place called Canada.

This is a (slightly revised for purposes of pedagogy) holiday file, showing some of the flexibility of our approach. Notice you can have holidays which show as Free "F" or Busy (abbreviation is left as an exercise to the reader) so that our Canadian cousins can list USA holidays as information for everyone in their company, but make sure the time shows as Busy (i.e., do not book then) for Canadian holidays on their calendars. 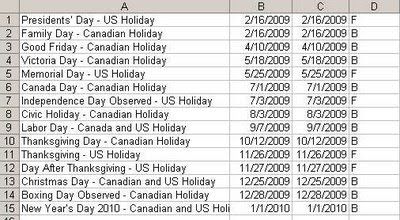 In an example of instant karma, the test site told us of a wonderfully simple short cut to permissions in setting up insertion (for those of you who have not been through a migration) based on BlackBerry Enterprise Server permissions, which we'll blog on separately.

Please note that this has the following advantages:

Any sites who have been through a migration with us are welcome to use this capability at no charge for Exchange 2007. Just drop us a line if you do not have the latest code.

It rained 22 days in June (in Boston). The last few days were glorious. And I missed the sun while dealing with a memory leak.

We hit this problem while translating legacy Exchange DNs into SMTP addresses in our Exchange Room analysis tool. The culprit -- System.DirectorServices (.Net 3.5)
calls to GetDirectoryEntry().Properties. With each call to System.Directoryservices, memory use jumped by 120 bytes. The annoyance became a problem after we looked up three fields - for 8,000 users.

I did that. So did other folks posted similar problems in the MS forums. All were told to use dispose. It didn't work. After reading dozens of responses, someone said try the "using" contruct along with "dispose". I did. It worked.

For those of you who don't want to find the mines by stomping on the ground, here is sample code that shows System.DirectoryServices calls broken out into an excessive number of using blocks:

Keeping an eye on keyword searches that bring folks to our site usually has few surprises.

Then last month this one showed up: "bulk move meeting maker oracle calendar" (right in there with "calendar migration oracle to exchange" and "meeting maker exchange calendar convert").

Yes, Oracle does have a process to convert Meeting Maker into Oracle Calendar.

They smartly used the Meeting Maker export DAT format (just as we do - it's independent of operating system so it's the most natural format and live Meeting Maker data is a horror show of complexity).

Sidebar: Turnabout fair play with an "X" to Paul Lynde. That's the same
strategy we use to move data OUT of OCS, using the utilities Oracle provides for moving calendar data between servers.

BUT when we ran the MM to OCS conversion (a ways back when we were figuring out how to convert Oracle Calendar to Exchange), we discovered they had missed several key attributes and in general failed to impress us with their solution (we did try licensing our tech to them but they were not interested). Since their own published report example consists mainly of "Nothing to import" messages, you should be appropriately wary.

Cornell did this nice guide when they migrated out of Meeting Maker into OCS and Penn State apparently moved last year.

If you want a real geek instance of calendar comedy, check out their Troubleshooting Calendar Migration Guide for their Microsoft Exchange migration consisting largely of the equivalent of "Step 2: Discard remainder of killer whale carcass" making success seem as accessible as Larry Ellison's yacht habit.

If it works for you, that's all the matters.

As always our message is: try it out for yourself beforehand and follow Reagan's maxim of "trust but verify."

But also be prepared to migrate again in a few years.
Posted by zyg at 6:09 AM No comments: