We ran our first field migration into Zimbra 7 this weekend (out of a Meeting Maker legacy system).

We had early reports of problems with recurring meetings in Z7 migrations, but tested well in advance to make sure that did not happen.  All is well.
Posted by zyg at 1:59 AM No comments:

In a previous post, I outlined a process to find and remove Ghost Delegates from Exchange. (To recap: you turn a delegate a ghost delegate by deleting the account from AD without removing the delegate permissions in Outlook.)

In this post, I'll outline a process that avoids the ghost delegate problem (by finding and removing delegates BEFORE deleting the terminated user's account.) There are two steps: search AD, and then remove the delegates.

The hard part was finding all users that granted delegate rights to the "soon-to-be-deleted-account." I dredged up two "oldies but goodies:" LDIFDE and CSVDE to do a reverse-lookup for a terminated user using the "public delegate" fields:

Here are both commands:

Note: the LDIFDE command limits the scope of its work to the "OU=TestUsers;" csvde seaches the entire enterprise directory.

Here is an output from LDIFDE, in which we found all of PublicDelegatesBL of "Andre Admin" (it's just Big Boss):

Notes: the "terminated" user is termuser@mydomain.com; the account that granted delegate rights was bigboss@mydomain.com.

p.s.: I tried Exchange Management Shell, using a new Exchange 2010 commandlet: "Get-MailboxFolderPermission." But it was difficult to do a reverse-lookup (i.e., find all users who grated the "terminated user" permissions: I had to type that user's display name correctly or got no hits.... Plus, this commandlet isn't available for Exchange 2007 customers.


Here is how to get Big Boss' permissions:
Get-MailboxFolderPermission -Identity bigboss:\Calendar

FYI, you can set accessrights, particularly editor rights, between "big boss" and "her admin," that you can't do if your end users access their Exchange calendars via OWA (only):

A Sumatra client called for help - a flood of NDRs were driving their Exchange server to its knees. The problem: a boss granted his admin delegate rights his calendar. Along with that, all calendar-messages were forwarded to to the admin. After the admin left the company, the admin's mailbox was deleted.

No big deal. They went into the boss' Outlook delegate and tried to remove the delegate, but couldn't -- Outlook reported the delegate was "(not found):" 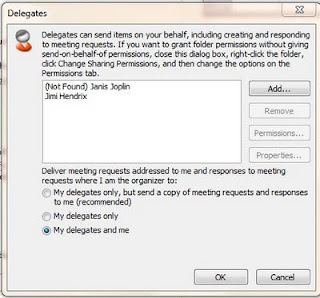 The delegates are there but you can't delete them. Ghost delegates.....
The root cause: they didn't remove the delegate permissions and forwarding rules before they deleted the admin assistant's mailbox.

For the curious, Glen Scales blogged about "How to deal with invalid delegates," and "Displaying delegate forward rules." Even better, Glen wrote some powershell code to exorcise our ghost delegate!

Here is what we did to remove the ghost delegates

We've been getting a lot of inquiries lately from people wanting to migrate calendars out of Zimbra and into Exchange.

You read that right.

Now that we finally have OAuth for Google working (one of our engineers described Google's documentation as having "duplications, contradictions and gaps in between."  I describe it as a "mess") we're inserting calendar data server-side to Google with full-fidelity and no end-user intervention.

We've read the handwriting on the wall and see that there are sites out there looking to bring their calendar data from Microsoft Exchange over to Google and are not thrilled about having to use PSTs to do it (we don't blame you).

If you are contemplating such -- drop us a line.  We want some feedback on how you'd like it implemented.
Posted by zyg at 12:16 PM No comments: