Things are really busy here in Sumatra (which is not in Asia but is rather an autonomous people's republic just outside of Cambridge, Massachusetts). Currently the user count of clients waiting to migrate to Exchange 2007 from Meeting Maker and Oracle Calendar is over 50,000 (the user count of prospects waiting on Zimbra is less than a tenth of that so we budget our time accordingly).
And we have good news!
On Monday we released the Exchange 2007 insertion code to a client with 3000 users for their test environment. 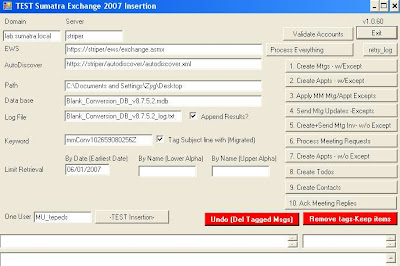 As with our other migrations this runs server-to-server, reproduces meeting guest lists, responses, and recurrence patterns as closely as possible, and includes the famous Sumatra "Undo" capability.
Preliminary field results are good and we'll update you as we proceed.
Posted by zyg at 6:40 AM 2 comments: