Been working with the Zimbra calendaring functions

Just because we get asked about everything we've started taking apart the Zimbra calendaring functions. In general -- it's not up to Exchange / Outlook standards (so far), but truthfully it's not bad (i.e., a corporation would take it over giving all its calendaring data to Google any day).


Things I really like about it -- the way accepted, declined, and tentative meetings show up with varying degrees of transparency. Very intuitive, very elegant: 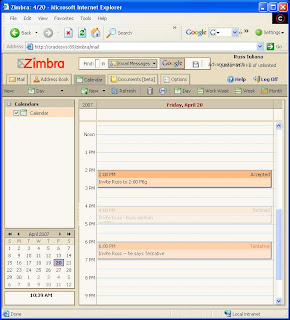 
On the other hand there's zero concept of private activities or degrees of delegate access.


Calendar migration from Outlook via PST is better than we typically see with most packages. Zimbra manages to preserve the recurrence pattern of meetings and exceptions, and there is an option to change your email address on meetings from your former email to your new one if you're changing.

On the downside, it doesn't change guests' email so when I brought it up in our test lab (changing domains) I had outdated guest lists. Migration is also done on a single user basis (making it a pain if you have a large base you're migrating).


I didn't bother with the Domino or GroupWise migrators.
Posted by zyg at 3:34 PM 1 comment:

Email ThisBlogThis!Share to TwitterShare to FacebookShare to Pinterest
Labels: Zimbra

We've noticed everyone else with a blog is into visuals

We've noticed that everyone else with a blog has visuals to publish and since we're calendar server wonks this puts us in a rather difficult position (calendars looking so boring and all) -- but we do have this image: 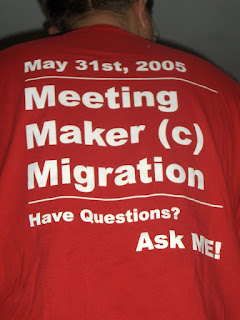 of a T-shirt from a migration we did into Exchange of a legacy calendar system called "Meeting Maker."

We moved 9,900 users and resources that weekend.

Kudos to Shabana at Marfic who found a bug in holiday insertion with the Sumatra Utilities.

We had to rev the code so that holidays would insert correctly with the new CDO that Microsoft issued to fix the DST fiasco.

If you're trying to insert Holidays please use version 2.3.25.
Posted by zyg at 8:21 PM No comments:

We were trying to install Exchange 2007 on one of our lab servers so we could continue to coexist with an existing Exchange 2003 domain.

If you are trying to do this:

Make sure you are running the install as Domain Admin and Schema Admin (and for good measure also an Enterprise Admin).

We neglected to do this and found intermittent problems throughout our initial configuration.

Yes -- it's obvious in hindsight -- but it was not obvious to us on Thursday afternoon when we were considering taking sledgehammers to our hardware.

Had we done this using VMware's 64 bit emulator we could have rolled back Exchange and tried again. Instead, we'll be reformatting and trying again.
We're hoping someone else will benefit from our experience.
Posted by zyg at 9:38 AM No comments: