Throttling is a wonderful feature to get rid of during a migration.  You have the need -- the need for speed.  Throttling can sometimes be the annoying speed bump or rumble strip that at best slows you down and at worst halts your migration.

Fortunately there's a good guide to how to disable using the user interface on Office 365:  Disable EWS throttling in Office 365 – Exchange Online

We don't re-do work that's already been done -- this is a good, straight-forward guide.

If your interface does not have this option, open "Help" and type in "Increase EWS Throttling Policy."  Should bring up this page and you're good to go. 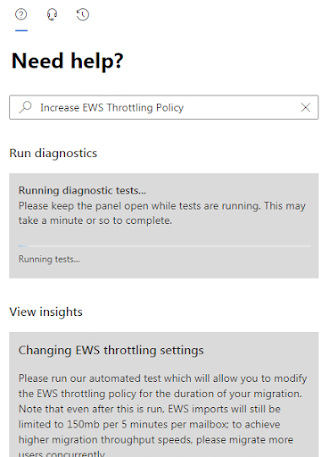 Migrating from Apple iCalendar to Office 365? Use GUIDs.

If you're migrating from Apple's calendar offering, you need to map the user GUIDs to target email address in Office 365 / Microsoft Exchange.

How do you GET the GUIDs?

Via an LDAP Query is most convenient.

What can we say?  We're market-driven.

We didn't get much response the first time we did a travel time add-in for Outlook / OWA, but in the last few months our volume on this has improved so we re-wrote the code.

Our thinking is that we'll keep the version we currently have available for free (it's based on version 1.4 of the Outlook JavaScript API) while we work on a more full-featured version for the enterprise..

We've been working on something we call Sumatra Calendar Insight -- and we'd like you to try it out.

Where are we going with this?

Frankly, we’re looking for direction.  Over years of migrating legacy calendar servers into Exchange we’ve often done analysis on the data and approached mining it in several different ways (usually for resource availability and effectiveness).

Microsoft MyAnalytics does a good, simple job of helping you get focus time every week or so, and Microsoft Productivity Score promises to give your admin some insight on your global productivity on some schedule with a single score, but missing in all of this is on-demand access to the kinds of detailed statistics power managers and enterprise watchdogs need.  And of course, everything Microsoft does has ignored resources – maybe not an issue now but the pandemic will not last forever.

Sumatra Calendar Insight is a proof of concept demo – we can get at this data and deliver it to you on demand.

So we’re asking: what kinds of data do you want to get at?  And why?

Having been locked in our houses / apartments / cells / space ships for a few months we started working on a new application that analyzes calendar data for users on Office 365.

We think that calendar analysis should be more detailed than asking "do you think you have enough time set aside for doing real work?"

We're thinking more like "Wonder how your team is spending their time?” and “Too much video and not enough work?” and "We've got a Zoom contract, what're these Teams video meetings doing here?"

Of course we can also do this server-side in Exchange and look at group aggregate statistics,which we think is a lot more interesting in a corporate environment. 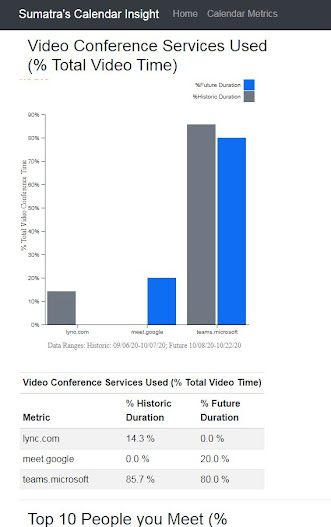 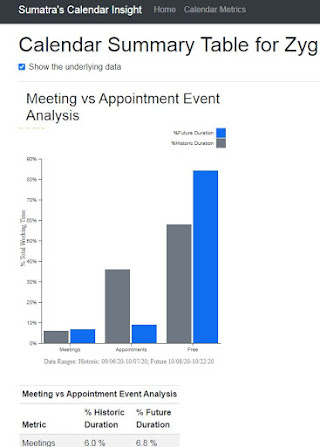 Anybody want to try it out in a beta version please let us know -- we like listening to people.

A consulting company with 100 employees was running a legacy version of Exchange using a VPN to their work from home users.  Their VPN expense average cost was $200/mo/user.  They tested the “free” Microsoft migration tools.  Moving email would take a month.  They considered migrating PSTs in bulk, but the bulk upload turn-around was ten days.  Losing ten days was unacceptable. HYBRID deployment?  Too complicated and arduous for them to even get through the manual.

Free was not an acceptable solution.

What did Sumatra do?

The bottom line:  Sumatra migrated 100 users in eight hours -- with little involvement from IT.  The customer said Sumatra saved them $100,000/year in expense.

The uncertainty around Covid changed the Sumatra’s customers support their end users. It was a nightmare when IT reconfigured everything so end users could work from home (WFH).  For non Office365 customers, costs included VPN connections at $50-$200/month/user.  Their CFOs realized a Microsoft Office365 license ($12.50-$20.00/month) would save thousands!

There are five themes that run through the inquiries we’ve received and what we've l;earned from our customers in the last few months.

What are customers asking for? Everyone who calls us for help wants:

* Legacy products are pretty much anything except Microsoft Office 365 at this point.  Google calendar is a dark horse, but our experience is anyone who's already gone for Google doesn't want to actually pay to move out.

The other thing we've learned is that imapsync is excellent at the sort of last minute touch-up work that invariably needs to get done: synchronizing a few folders or mailboxes.