calendars have the following delegate options:

Exchange has the following delegate options. 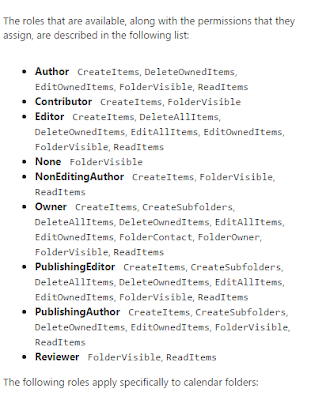 You should now see the problem about how you move from legacy to target and keep everyone happy.

Basically, you cannot possibly keep everyone happy if you try to migrate delegate permissions from Oracle to Exchange.  The only sane solution is to let users set delegates themselves post-migration.

While it is possible to set Delegates via PowerShell in Exchange via Add-MailboxFolderPermission, Sumatra does not recommend migrating legacy delegate lists.

Exception to the rule:  Zimbra to Microsoft Exchange.

Since Zimbra consciously decided to rip-off emulate as much Microsoft functionality as explicitly and exactly as it could, you have a higher chance of success here.  But please see comment #2 above about propagating a culture of "maximum access."

Using PowerShell to SET permissions in Exchange is straight-forward.

BEWARE:
Migrating Zimbra permissions to Exchange does not automatically set up menus for user access via Outlook or OWA!

You will likely perpetuate security issues for users who have changed roles and should no longer have access to some accounts! Your migration is the best time to review all of these!

This also works for tasks and contacts.

To save to a text file append '> permissions.txt'

To insert Zimbra permissions into Exchange:


This will give Zyg editor delegate access to Jimi's mailbox.

And of course, you will need to manipulate or edit the text file you originally extracted from Zimbra.  But this is not beyond high school programming or scripting, people.

You can also delegate other folders like jimi@sumatra.local:\Calendar and so forth.

See also: How to use Powershell to set delegate for user mailbox in Exchange 2010 and Office 365

Again, just because you can migrate permissions does not mean you should.

Distribution groups are not as much a pain in some cases as you might imagine!

Keep in mind these are an email migration issue as opposed to a calendar migration issue -- but we're interested in writing about stuff to solve problems, not pass blame.

Nobody else we know does this.

And in general for legacy systems it may not be possible to even generate the information you need in order to make this work.  As usual we're talking server-side solutions for the entire enterprise as opposed to lame client-side solutions for one freaking user at a time.

But we'll tell you how to do this if you have the chance.

Again we begin with the end business goal of migrating into Exchange or its cloud sibling clearly in mind.

Refer to: Distribution groups and EWS in Exchange   and use New-DistributionGroup.

From Zimbra it's not too bad.

In Zimbra getting this information for public groups is actually very straightforward.  See Zimbra.List all existing distribution list and the respective members

will list all distribution lists with their members and output it to a text file.

The same command with some variations:

Now -- keep in mind, if in going into Exchange you are changing any user IDs or your domain you're going to need to do some work on the export file before you start using EWS to re-create the lists.

And for some business purposes you want to consider Dynamic Distribution groups.  You may also know these by their former name of Query-Based Groups.

These come to the fore when you have a (wait for it....) very dynamic membership in the sense of people changing roles or having a high turnover.  Example:   A project group or a support desk.

Check over Dynamic Office 365 Groups might come with a big cost for a good analysis of the pros and cons.

Windows update consumed all of my hard drive

I blogged about "Surviving a botched windows update" two weeks ago after the December 12, 2017 Windows Update.  I thought my problems were behind me. I was so wrong.  It took almost two weeks to find and fix the problem. What a waste of time.

Here are the four symptoms:


Update installation may stop at 99% and may show elevated CPU or disk utilization if a device was reset using the Reset this PC functionality after installing KB4054022.

Here is an abbreviated version of the steps I took (from the KB article.)