In the several hundred migrations we've done over the last decade we've adopted as an article of faith that the right way to move meetings is as a Big Bang. It preserves the connections among all the users you migrate and it's not hard to explain to end users. A win-win for the community, an intense time for the administrators, but they get the win-win for the community.

We've always told you though that if your user community mainly consisted of "islands" who tend to only meet internally you could get away with migrating a department (or island) at a time.

But nobody took us up on it.

UNTIL a university in upstate New York said "OK -- we'll try that."

Russ and Zyg sucked in their breath and said "All right then. But if things are not going well after the first few we're going to re-evaluate this, right?"

THREE separate group migrations into it, they seem to be going all right.

There's a few more to go and we're still looking at it, but the results so far are good and we want to give you a preliminary read on how they did it and what's making it work. We're also giving them the opportunity to add anything they want to share in this post.

So our moral: It is possible, but start small and keep an eye on it as you move forward.

What's this look like from an end-user's perspective? The same as it would in a full migration. They walk in one morning and user Meeting Maker. They walk in the next morning and they're on Exchange. BUT: Any MM users not in the migrated group are now not on their guest lists. That's the price you pay for this staggered approach. In the immortal acronym of Robert Heinlein as morphed by Milton Friedman, TANSTAAFL.

Blast from the past 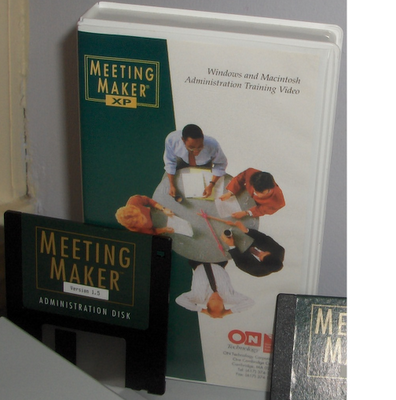 Look what Zyg found in the basement.

Meeting Maker 1.5 diskettes (DISKETTES!), back when it was Macintosh only. The video comes from a few years later after a bunch of est-heads (no joke) bought the company and decided to align themselves to the up-and-coming software powerhouse -- Novell.