John's calendar in OCS 9.0.4 looks like this, note the Declined meeting (in red) and the Tentative meeting (in blue): 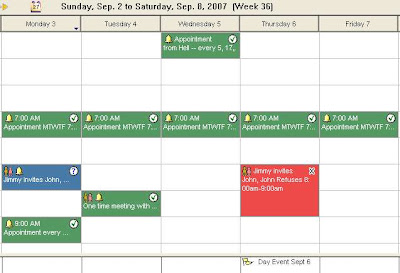 In Zimbra it converts to this (with the Tentative and Declined acting as they should in Zimbra):

As we've told some of you, the tool that we used to take the OCS exports and re-create recurrence patterns (ICS as RRULES) is being re-worked for field use (as opposed to the way we used to do it in Sumatra labs). It looks like this: 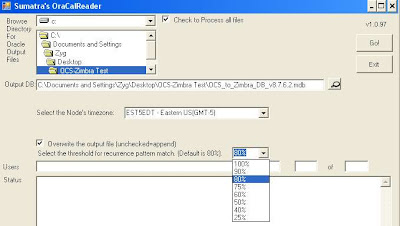 with our trademark "as few buttons as possible but make all of them useful" design philosophy.

In Outlook / Exchange 2007, the same calendar looks like this (Declined and Tentative are dealt with in the Outlook INBOX rather than directly on the calendar):

Note also that the OCS Day Event becomes an All Day Event in both Outlook/Exchange and Zimbra.

Addendum February 2017 This is way up over the past week. If you are looking to migrate Oracle Calendar Server into Zimbra drop us a line https://sumatra.com/contact-sumatra/ If you want to do it right there's more to it than just importing ICS files.