One of our favorite sites contacted us about a problem they're anticipating. Knee-deep in solving said problem we at Sumatra wonder if anyone else has the same issue.

They're changing a number of SMTP addresses and want to change the associated Lync SIPs to match.  Here's Microsoft's guidance on how to do that for Office 365.  And a different take on scripting a solution.  See Impact of Changing a User's SIP Address for a full discussion.

Changing the SIPs is not the problem, but the number of existing meetings with the old SIPs that are then left in your users' calendars IS a problem that requires updating. 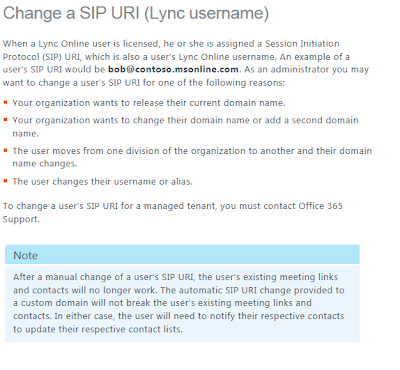 So in this example of an existing calendar item, let's say riuliano became russ_iuliano, to keep end users from going bug-house you'd want to modify all the LiveMeeting URLs in existing calendar objects server-side and update them. 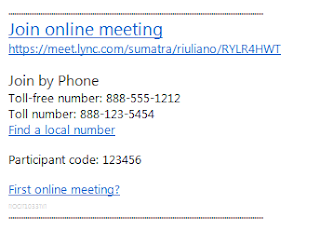 And this is the cue for Sumatra's ability to manipulate Exchange calendar data.

Does anyone else out there have the same problem?
Posted by zyg at 7:08 AM